Since the 1960s, women have started to earn undergraduate Bachelor's degrees in STEM (Science ∙ Technology ∙ Engineering ∙ Mathematics) fields more and more. Certain majors have increased enormously. For example, women earning Bachelor’s degrees in biology went from 31% in 1967 to 63% in 2017 – that’s double in the last 50 years or so. Even better than that is women earning Bachelor’s degrees in chemistry, which went from 18% in 1967 to 50% in 2017 – a 32% increase in the last 50 years. 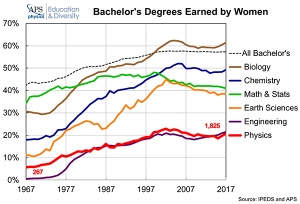 Why are there fewer women in the field of mathematics?

According to a study done by the University of Washington Institute of Learning and Brain Sciences, a gender role in mathematics is established as early as second grade! The study showed that girls develop a sense that boys are better at math and that math is "not for girls." Now, thankfully, not every little girl is discouraged from pursuing math later on in college nor are boys exclusively pursuing only math, but on a systemic level, this is not good.

What can we do as parents to encourage our girls that math can be for them too?

Here is a brief list of ideas on how to do exactly that:


These ideas will benefit all children of any gender, not just girls. But for our girls specifically, developing a better, more nurturing culture of mathematics early on will help change their (and our) perception of math. You can read more about this topic by visiting the Math For Love site